Increase the availability and safety of bicycling and micromobility travel

The terms ‘biking’, ‘bicycling’ and ‘bikeways’ broadly refers to people who use any type of bicycle or micromobility vehicle like scooters or electric-assist bicycles.
Micromobility includes various human-scale vehicles –like bicycles and scooters, which are typically shared and can be electric or human-powered.

Over 30% of the trips we take in Minneapolis are less than three miles1. Sometimes these trips feel a little too far to walk but are not long enough where it is practical to take the bus or drive. Bicycles and other low-power micromobility options, such as electric-assist bicycles and scooters, can be ideal for these short trips. As more people use these new transportation options, the demand for safe and comfortable places to ride, charge and park these vehicles will increase.

Options are expanding with new types of bicycles and low-powered vehicles:

The city’s growing bikeway network has encouraged more people to bike and use micromobility vehicles. Even with this progress, many people in Minneapolis do not see riding a bicycle or scooter as a routine way to get around. Narrow bike lanes, lack of physical separation from motor vehicles, challenging intersection crossings and snow or ice are just some of the reasons why people do not feel comfortable.

To make bicycling, in all its new forms, a real option for more people, the plan establishes an All Ages and Abilities Network to be constructed over the next ten years. This network will include protected lanes and trails that are physically separated from moving cars, trucks and buses, will feature improved intersection crossings and be accessible year-round. The goal for the All Ages and Abilities Network is for people on bikes to only share space with cars on quiet low-speed streets or on neighborhood greenways.

View a snapshot of bicycling in Minneapolis

Select the strategies below to learn more

Reaching our transportation goals requires strategic action. Listed below are strategies and actions that we plan to undertake in the next 10 years. 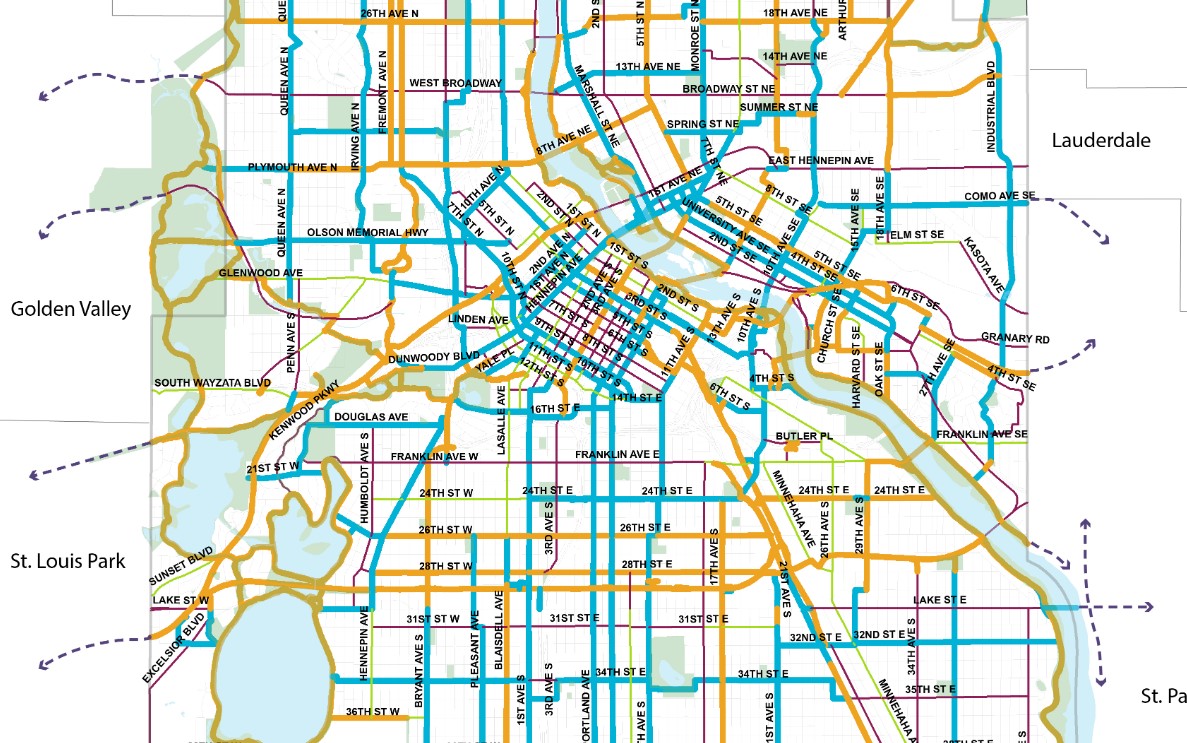 All Ages and Abilities Network

Check out the All Ages and Abilities Network